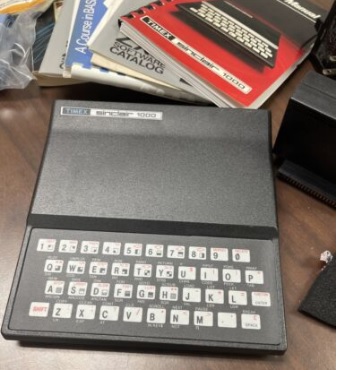 he Timex Sinclair 1000 (or T/S 1000) was the first computer produced by Timex Sinclair, a joint venture between Timex Corporation and Sinclair Research. It was launched in July 1982, with a US sales price of US$99.95, making it the cheapest home computer at the time; it was advertised as "the first computer under $100".[1] The computer was aimed at regular home users. As purchased, the T/S 1000 was fully assembled and ready to be plugged into home televisions, which served as a video monitor. The T/S 1000 was a slightly modified version of the Sinclair ZX81 with an NTSC RF modulator, for use with North American TVs, instead of PAL for European TVs. The T/S 1000 doubled the onboard RAM from 1 KB to 2 KB. The T/S 1000's casing had slightly more internal shielding but remained the same as Sinclair's, including the membrane keyboard. It had black-and-white graphics and no sound. It was followed by an improved version, the Timex Sinclair 1500 which had substantially more RAM (16 KB) and a lower price (US$80). However, the T/S 1500 did not achieve market success, given that the marketplace was by this time dominated by Commodore, RadioShack, Atari and Apple.

computer for the United States market. It was also marketed in Canada, Argentina, Portugal and Poland, as Timex Computer 2068 (TC 2068).