The Philips P2000T home computer was Philips' first real entry in the home computer market, after the Philips Videopac G7000 game system (better known in North America as the Magnavox Odyssey2) which they already sold to compete with the Atari 2600 and similar game systems. There was also a P2000M version with an additional 80-column card for use with a monochrome monitor. This version shipped with a monitor cabinet also housing a dual 5.25" floppy drive.

The P2000T was a Z80-based home computer that used a Mullard SAA5050 Teletext display chip to produce the video picture and a small Mini-Cassette recorder for 42 kilobytes of mass storage capacity. The Mini-Cassette was treated as a floppy drive from the user's perspective while using the automatic search for a program (CLOAD command) or free space (CSAVE). A command to display the directory of the cassette also exists.[1] Philips used components they already produced for other markets (television sets and dictation machines) to quickly design a small computer system. It was partially designed by Austrian professor Dieter Hammer. 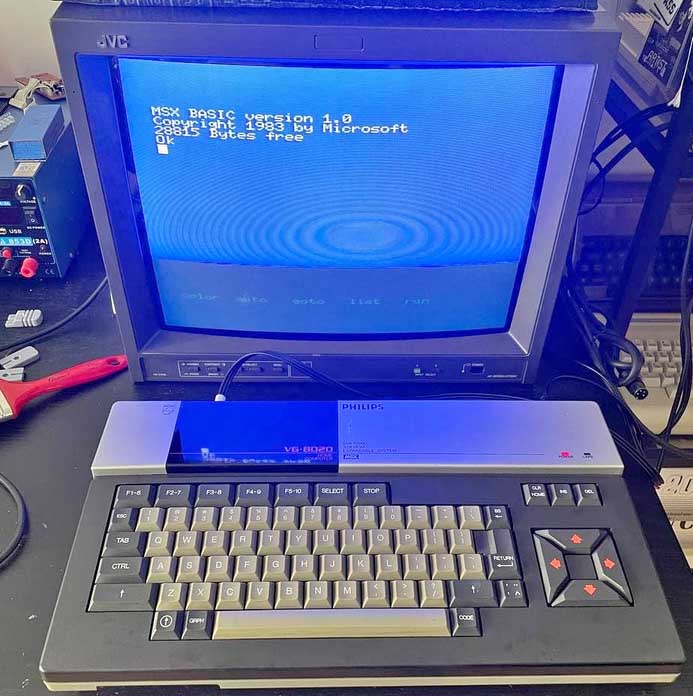 The VG 8020 was Philips' third MSX 1 computer, after the VG8000 (which did not even have a printer port) and the VG8010 computers.This version had a real keyboard, not a chiclet keyboard like its predecessors. The VG-8020 was released in 1984 and featured a Zilog Z80A microprocessor clocked at 3.56 MHz, 64KB of RAM, 16KB of VRAM, and two cartridge slots.

The Philips VG-8235 was an MSX-2 - home computer from Philips and came in 1986 to the market. The new price at that time

was around 1500 DM . The VG-8235 was one of the best equipped MSX home computers at the time. It had already integrated a 3.5 inch floppy disk drive (capacity 360 KByte) and was equipped with 128 KByte video memory. The video memory enabled different screen modes with a maximum resolution of 512 × 212 with 256 colors.