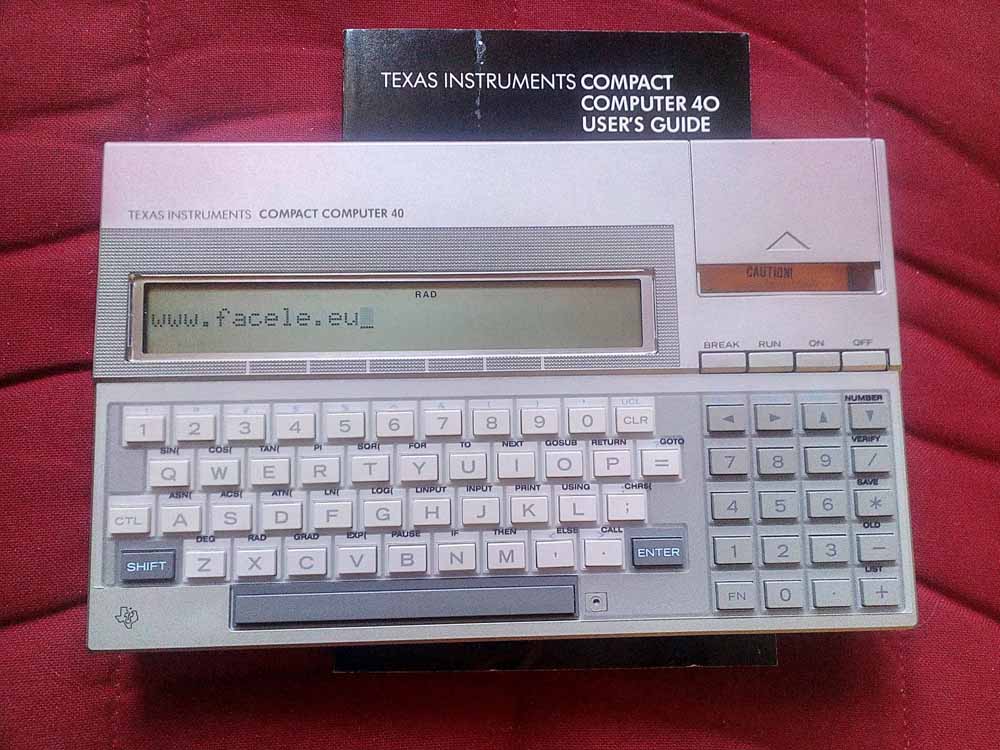 Compact Computer 40 or CC-40 is a battery-powered laptop that was developed by Texas Instruments and released in March 1983. Priced at $ 249, it weighs 600 grams and can be powered by four AA batteries or an adapter CA. It was designed as a portable business computer and uses TI's TMS70C20 CPU, an 8-bit microprocessor running at 2.5 MHz.

The CC-40 has 6 kilobytes of random access memory (expandable to 18 KB), 34 KB of read-only memory, and a 31-character LCD display. It is capable of running for 200 hours on one set of batteries and the memory is not cleared by turning off the unit, so a non-powered unit can retain data for several months.

The CC-40 has a single Hexbus port for connecting peripherals. The following Hexbus peripherals have been released: 80 column printer, printer / plotter, RS232 and modem. A "wafertape" digital drive (a licensed version of the Exatron Stringy Floppy) [1] pictured on the computer box was released as a prototype only, reportedly because it proved too unreliable. The inability to store the data has permanently damaged the sales of the CC-40.

Pay particular attention to the batteries, because they must be removed, otherwise you risk destroying the pcb of the plotter, as happened to mine, I had to sweat to get it started again

if you want to list the program, insert : LIST "10"
where 10 is the address of the HX-1000, you can change the address between 10 and 11 by changing the hardawre switch under the paper roll!