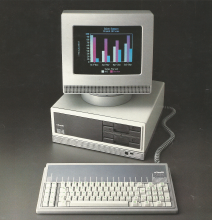 The Olivetti M24 is a personal computer produced at the Olivetti plant in Scarmagno since 1983 . It was born as a competitor of the IBM PC and had great success on all world markets.

Unlike the IBM PC, which adopted the processor Intel 8088 with a clock of 4.7 MHz, the M24 adopted the more powerful Intel 8086 , with the clock speed of 8 or 10 MHz (the second version SP ), a bus 16-bit data and the ability to increase performance by decreasing the memory refresh rate via software, CGA graphics or NEC 6845 graphics accelerator and 7 free expansion slots. Produced starting from 1983, in one of the typical configurations it cost about six million lire as of January 1986 , equivalent to 10,012 euros in May 2019 . An AT&T 6300 dating from around 1986: earlier models had the function keys lined up on the left side of the keyboard instead of at the top like this model. On the screen the NetHack videogame .

It was possible to choose the hardware and software configuration, from 128 KiB to 640 KiB of RAM (further expandable with EMS memory), 16 KiB ROM, two-unit floppy disk drive or the internal hard disk (only initially 5 MB, then 10 MB and 20 MB), or even two hard disks (one located externally), from the excellent Hantarex monitor with green or gray phosphors and color models. Already at the beginning of 1984 the standard configuration was with 640 KiB and 10 MiB internal hard disk or 27 MiB external hard disk.

Olivetti Prodest PC 128 is a home computer distributed in Italy by Olivetti since 1986 , the first of the Olivetti Prodest series .The computer is based on the Thomson MO6 model produced by the French company Thomson SA , on which aesthetic changes have been applied and the characteristic logo with the image of a pyramid added. The selling price of the basic version was 380000 lire, and was also sold in a second version called " PC 128 starter kit " which included the optical pen and ColorPaint software at a price of 420000 lire.